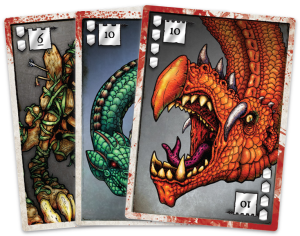 At its heart, Dunjiin is an Adventure game with Magic, Monsters, Dragons, and Skeletons.

It’s incredibly easy to learn and play. Our specially designed cards act as both Player Characters and Monsters. You will explore deep Dunjiins, uncover powerful Magic, discover glorious Treasure, and gain valuable Experience. The goal of the game is to survive longer than the other players, gaining Levels as you go. As you progress, you’ll learn how to set traps, hire assassins, and summon dragons. You can skillfully dodge Monsters so that they fight other Characters instead. You can use Magic to defeat all but the strongest creatures. You can shop for armor at the Shop, or cast powerful spells to predict your next encounter or make your Character stronger.

Over five years in development, this fun to play adventure game is easy to learn, though hard to master. We playtested this with our friends and families for years and (we’re not exaggerating here) everyone who played has enjoyed this original game. Even people who don’t traditionally like card games, or games in general have had only praise for Dunjiin™.

“I really don’t like card games but this one is a a lot of fun to play.”

“I like games with original art. This one has that.”

“I don’t like playing games with people… but this would be a good game to play… with people.” 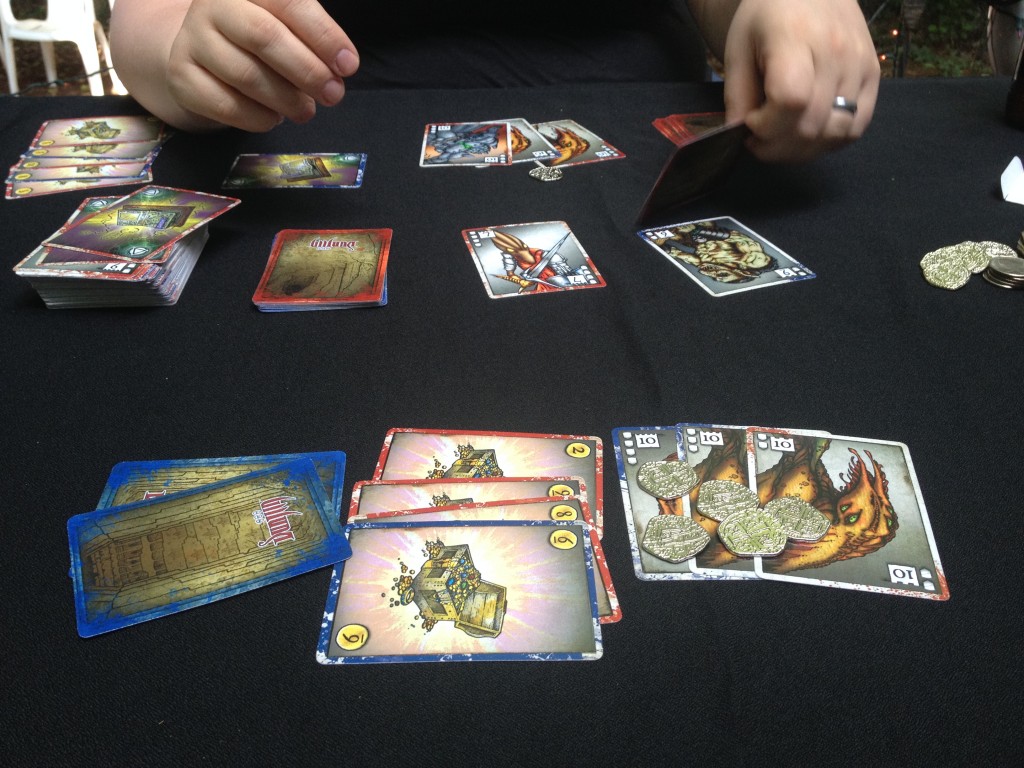 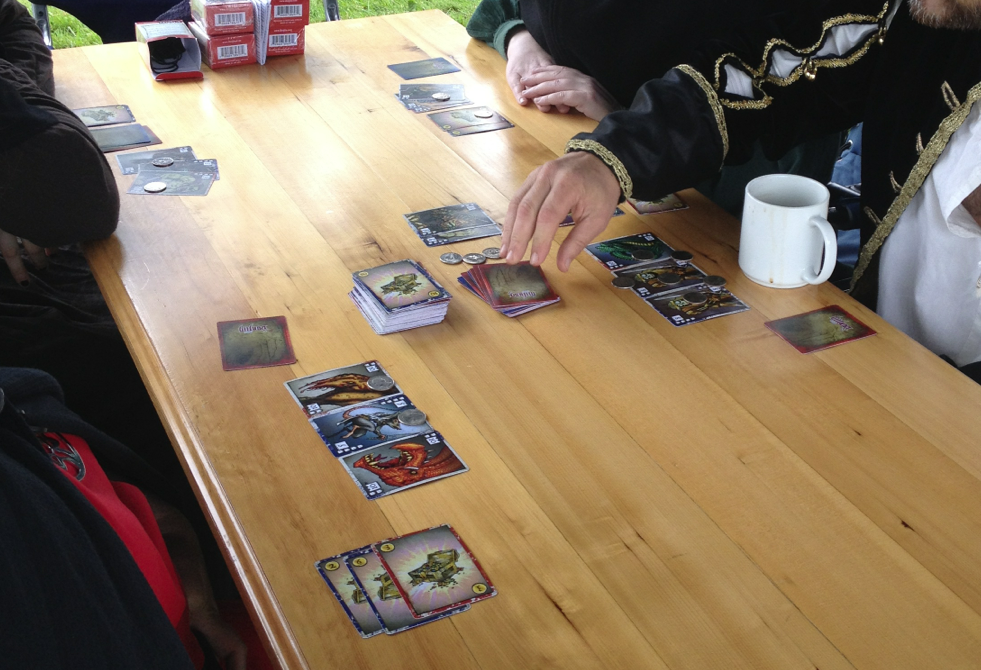 One day while my daughter Rissa and I were really, really bored and starting to get frustrated with each other, we decided that we wanted to play a game. But we’d already played all the games we owned a lot, so we decided to sit down and create a new game. We talked about things for a little while and then put together some basic ideas and started playing a new game. We called it Dunjiin. Rissa’s Bio-dad Jefferson liked games too. He helped us iron out a few ideas and added a lot of other ideas. We started playing it a lot. Rissa’s mom (my wife) Sarah started to play a bit too. But we were still changing a lot of the rules around to see what worked. She didn’t like that very much. After a few years, we had pretty much created all the rules and played the game with a lot of our friends who liked the game as well.

But there was a problem.

We didn’t have any art for the game and it was still kind of broken somehow. Eventually, I created the Alpha Deck. It was really ugly. The art was boring and the numbers didn’t work right. But we learned some things and changed some things. Afterwards, I created the Beta Deck. It was really pretty, but it used art from all over the Internet and none of it was going to be able to be used in a game we could share with our friends. The Beta Deck showed us that we still needed to fix a few things— which we did. But I still didn’t have any art, and no one was going to play a game with no art.

Then one day, when I was doodling, I drew this guy… 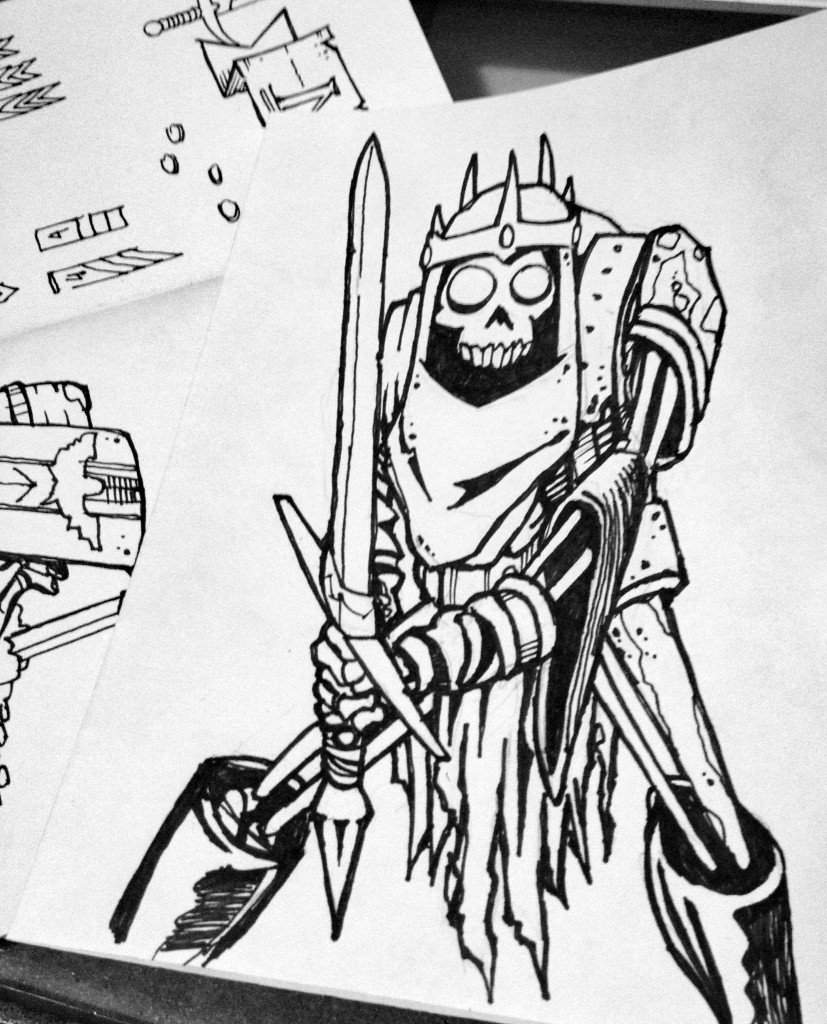 I thought it was pretty good and I started to think that I should start drawing more art so that I could get this game into other people’s hands. So I did. I drew a LOT of art. After that, Sarah suggested that show it to her brother Bill who draws in a similar style. He got excited and said he’d like to draw some art for it too. Which he did. It was terrific stuff! Then, I showed all that art to my friend Chris who said it was really cool and he wanted to add color. Which he did. It was awesome. I started doing a lot of Photoshop work to put the cards together. I added a few other pieces and found a few things I could use from a couple of other artists: Ronnie and Deevad. 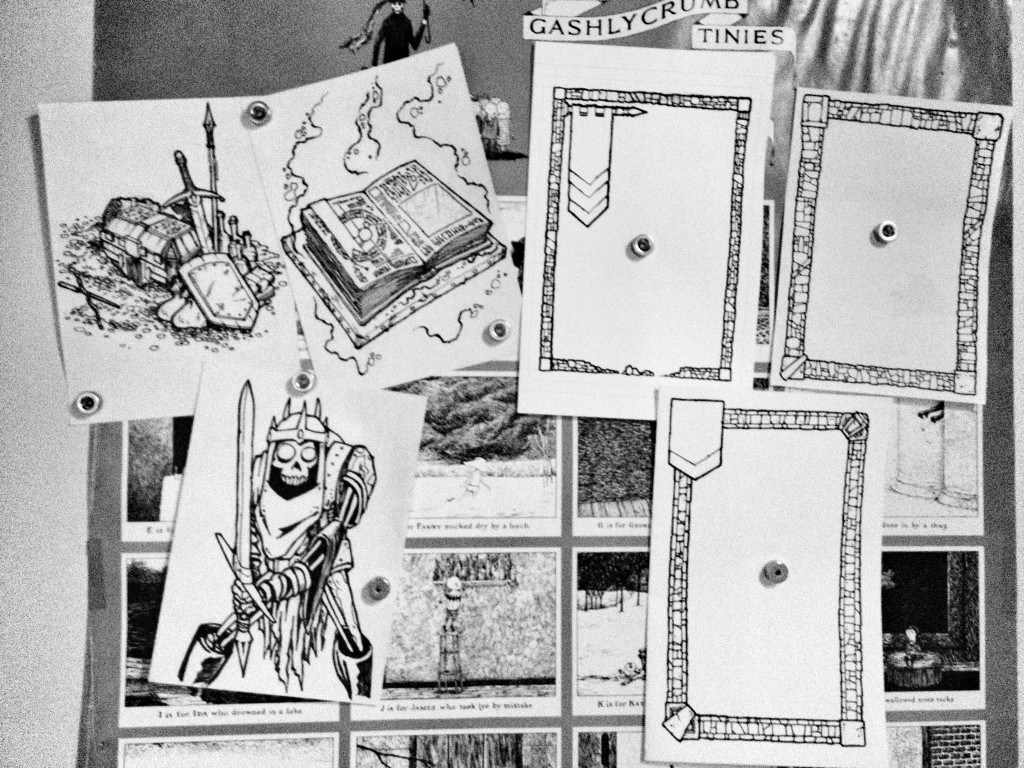 Then something else happened. We had to write the rules down. Except for a little cheat sheet, the rules had been sitting in our brains for most of the time, so it was tricky trying to get them written down in a way which made sense to a lot of people. I needed some serious help getting that right. Molly and Matt REALLY helped out getting the rules knocked into shape. Now it was time to build a web site so that MORE people could learn about the game.

All in all, it  took more than five years to develop this game and far longer than I would have liked to create the final art, rules and web site. It’s all done now and you can visit The Shop and buy a copy for yourself, friends, and family. We hope you like the game as much as we do. We play it often and hope you do too.